Another day spent further assembling the engine.  First the cam went in, followed by the thrust plate and timing gear.  The gear is a semi press fit and there is great temptation to tap it on to the cam end until it's seated.  But there is nothing but a freeze plug to hold the cam in place, and more than one unsuspecting shade-tree mechanic has inadvertently knocked out that freeze plug.  Once out, then only way to gain access to fit a new one is to pull the engine - a very costly mistake.

Anyway, having been warned of this before, I found a spot where I could fit a bar to hold the cam in place and not bank up any critical machined surfaces.  Then, with everything lined up - the key on the cam with the key way on the gear, and the timing marks on the crank and cam gears - I heated the cam gear with a torch to expand it to make fitting easier.  A little heat and a little tap tap tapping with the butt of a hammer handle and on it went.  Torques the nut to specs, and she's good to go. 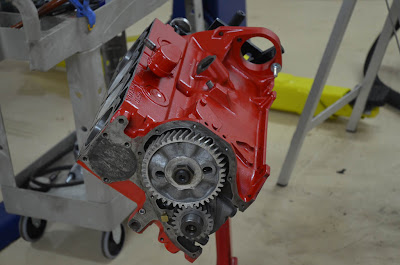 Next were the piston assemblies, which needed to be assembled into assemblies.  Basically the new pistons need to be attached to the connecting rods with the wrist pin.  Other engines I've worked on require a bit of a press fit and typically require heating the pistons much like the timing gear, but these were a smooth hand press fit so assembly was easy.  It did take a little sleuthing to figure out which face of the rods was forward.  The pistons are marked, but with the rods separated from the old pistons, that orientation was lost.  Pictures to the rescue!  I shot a few when I disassembled the engine and was able to identify some unique casing marks on one which revealed the correct orientation.  Problem solved - almost.

The first piston/pin/rod assembly went together easily, but on the second piston I was having a heck of a time getting the retaining snap ring into place.  I finally went and looked at the little package that they came in and discovered that the packaging, and the size marked on the package, was different for that one piston.  Crap.  But fortunately I had the old pistons still kicking around and was able to salvage and reuse a couple of clips from the old ones.

With all pistons installed and rods torques, I once again checked to be sure the engine rotated freely, and it's smooth as silk. 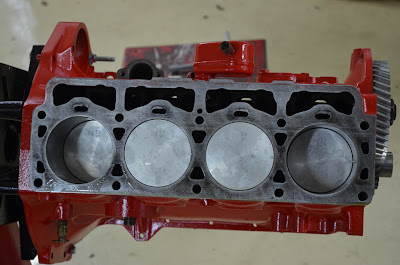 Next installed was the new oil pump, followed by a new rear crank seal and seal housing.
Then moving to the front of the engine I wen to install the timing gear cover only to find the new gasket was broken into 3 pieces.  Must have been some sort of shipping damage with all the gaskets just loose in a box.  No problem, that can go on later after I get another gasket.

Water pump next.  But wait, where's that gasket?  And what about all the O-rings to seal the pipes and heat joint?  All missing.  My guess is that they assume you are installing a new water pump on  a rebuild, and that the pump will include all the gaskets.  Not me.  I just put in a new pump a year ago, so now I need a pump gasket set.

OK, all is not lost, so I went to install the head.  Gasket fits - check.  Installed new cam lifters, fit the head, torqued all the bolts.  Done.  Cleaned up all the push rods, dropped them in place, then bolted down the rocker assembly.  Head complete.  Oh, and along the way I removed all the masking from the paint job which was a bit of a tedious process. 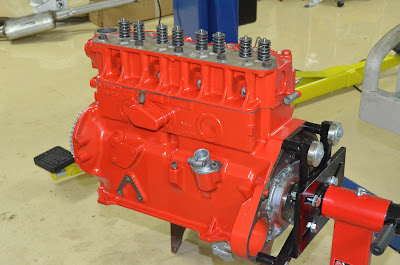 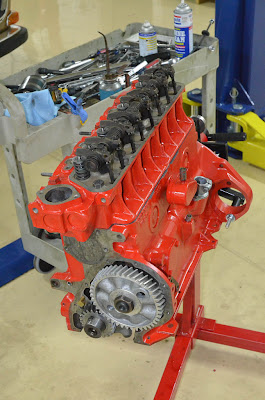 Now we are just down to accessories and external components like manifolds, motor mounts, water pump, timing cover, water pipes, alternator, etc.
Posted by Peter Hayden at 9:51 AM